Junji Ito and Uzumaki: The Strange Horror of Life

Junji Ito (伊藤潤二) and Uzumaki: The Strange Horror of Life

Born in Gifu prefecture, growing up Junji Ito was inspired by the works of Kazuo Umezu, artist of such notable works as the Shogakukan Manga Award-winning The Drifting Classroom. Ito later became a dental technician and balanced work with comics, even as his comic work was beginning to gain strong notice, earning him an Umezu Award for horror manga. His works range from terrifying shorts such as The Enigma of Amigara Fault, to bizarre and horrific longer works such as Gyo. He has also had success in having several of his stories made into TV shows and movies.

During the time that I lived in Japan, just over a year in a relatively small suburban port town across the bay of Nagasaki, I lived in an area fairly reminiscent of the setting of Ito’s story Uzumaki. I have found that there are few manga that capture atmosphere of living particularly in the more rural parts of Japan as well as Junji Ito’s three-volume masterpiece. Details like air raid sirens blaring at 5:00 every day to the layout of the towns and buildings are done with such an honest authenticity that it allows for anyone that’s ever lived in just about any part of Japan to connect with this town, while allowing someone unfamiliar with this kind of way of life to have real insight.

What is so powerful about Ito’s horror is the subtle details and emotional pull his stories have over the reader. His world is fleshed out both in his artwork, where he uses line in great clustered detail to lead a reader through each page and panel in an almost dizzying but absolutely purposeful manner. His facial expressions are intense and whether portraying madness or a subtle sense of dread, his characters feel believable. He is able to make even the typical, calm moments in his stories feel unnerving. While Uzumaki used spirals to great effect to dictate the flow of the narrative, his other works such as Gyo also played heavily with motion to build a feeling of loss of control. 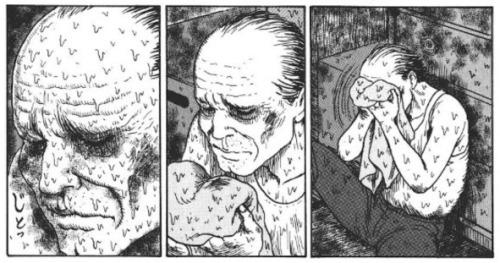 Image from the story Glyceride

The protagonists of Uzumaki, Kirie and Shuichi, are portrayed as fairly typical high school students with a normal relationship. They are thrust into a terrifying situation when the entire village is overcome with an unnatural obsession with the geometric form of the spiral.  It appears in everything, from the lines on a plate to the ripples in a pond or the coil of a snail’s shell. While the “spiral sickness” that infects the town is supernatural in nature, the real sickness is the trap that comes from not being able to escape this small town. Shuichi, being the one that commutes to go to school, is the one that’s able to sense the contamination while everyone around him is so accustomed to the way things are that they can’t see beyond their universe.

One of the most powerful themes throughout Uzumaki is the utter devotion the people in the town have towards each and to the town itself. The near insane dedication to stick by one’s friends and family even, as in many cases, they become literally twisted together or contorted as the spiral builds up through the story. It’s this personal sense of obligation combined with the spirals disorienting and terrifying supernatural control over the town that compels the reader forward and creates sympathy for the doomed residents of the town. You wish that Shuichi and Kirie would run from the impending doom, but you understand what keeps them there. Kirie’s devotion to her younger brother is particularly well-developed and heartbreaking as the story nears its conclusion.

Ito’s protagonists are often very sympathetic characters, never lacking in depth. In Uzumaki, as well as in Gyo and Hellstar Remina, there is the knowledge very early on that, in all likelihood, a positive outcome is impossible.  But there is still a sense of desperate hope as well. This is what makes Ito not just a master of horror comics, but a master storyteller as well.  I would suggest that even someone who usually finds themselves squeamish at the idea of scary comics could find something amazing in his work.

3 responses to “Junji Ito and Uzumaki: The Strange Horror of Life”