Steve Ditko and Mr. A.

Steve Ditko and Mr. A.

Mr. A, a creator-owned character of uncompromising principle who appeared from the late ‘sixties through the ‘seveties, is often cited as an example of an artist’s principals getting in the way of his art. It’s true that Mr. A. comics are a much less entertaining read than the Stan Lee penned adventures of Steve Ditko’s prime years. (Together, Ditko and Lee created the timeless characters,  stories and universes of Spider-Man and Dr. Strange.) On the other hand, many fans of Ditko, the master craftsman, prefer to ignore the cranky ranting all over Mr. A’s pages, and to view the work only as stunning examples of elegant page design and expert visual storytelling.

But really, there’s no separating this art from the artist. Ditko’s command of the medium bursts forth because of the passion he is committing to his singular vision. Even though it sees itself as straight and narrow, that vision is as twisted and weird as Ditko’s unique faces, compositions, costumes and dreamscapes.  Which is what makes these comics so compelling.

Ditko had sharpened his teeth on monster comics for Charlton and Marvel before bringing his unique sense of angst and dread into the land of super heroics. His character’s faces are often caught in grotesque grimaces, fraught with emotion, and their hands are gnarled and twisted, pinkies thrusting out while middle and pointer-fingers jab down. These seething, tortured souls helped the Marvel “House of Ideas” unleash a new level of complexity into the goings-on of a formulaic kids’ genre.

He had a falling-out with Marvel, and returned to Charlton, the publisher with a tight fist around its money and a loose grip on its editorial reins. It was then that Ditko created The Question, a journalist-vigilante who wears a trench coat, fedora, and some sort of flesh-colored mask that completely obscures his facial characteristics. This hero was ruthless with villains, and punished crime wherever he encountered it. He saw his actions as just to a point of perfection, following Randian principles of unfailing objective logic, and acting as a uniquely qualified (and self-appointed) dispenser of virtue. 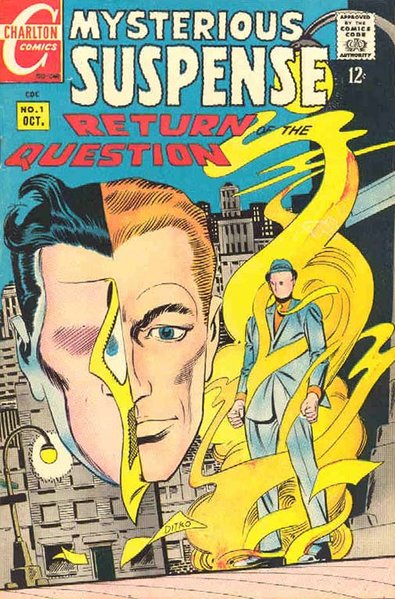 But The Question was only a warm-up. In an interview with the fanzine Marvel Main, Ditko explained, “I didn’t want to do Mr. A, because I didn’t think the Code would let me do the type of stories I wanted to do, so I worked up the Question, using the basic idea of a man who was motivated by basic black & white principles.” Not about to make it in the colorful pages on the newsstands, Mr. A. was appropriately destined for a life in black & white underground comics.

Mr. A. debuted in 1967, in the third issue of Witzend, a collection of more artistically fulfilling side projects by mainstream comics professionals led by Wally Wood. In his very first panel, the Objectivist hero addresses his readers directly, stating his case that in moral life, there are no shades of gray, only evil or good, black or white. The hero stares at us, blank, emotionless. There’s a montage around him showing that his calm face is actually a metal mask, and that evil is truly disgusting. At the story’s end, Mr. A. beats up a nasty juvenile delinquent, ironically named Angel, and then allows the kid to fall to his death from a city rooftop. Mr. A. explains that he feels no remorse for this act, and proclaims that to pity the murderous teenager would be to abuse the avenger’s emotions. As Ditko put it, “Where other “heroes” powers are based on some accidental super element, The Question and Mr A’s “power” is deliberately knowing what is right and acting accordingly.”

Gone are the clay feet of classic Marvel heroes. Gone is any sense of dilemma or complexity behind a hero’s mask. Instead, we see a man who has declared himself judge, jury, and certainly executioner, and a creator who has used his creation as a mouthpiece to lecture his readers on Ayn Rand’s philosophy.

At the climax of her most famous novel, Atlas Shrugged, the book’s hero quotes Aristotle, declaring that “A is A…a leaf cannot be a stone at the same time , it cannot be all red and all green at the same time, it cannot freeze and burn at the same time.” This speech might as well be the “origin story” for Mr. A., who sees nuance as only moral compromise, which leads inevitably to corruption, and eventually, out-and-out evil. So, somehow, this means that he must go out in the streets, throwing business cards marked on one side by equal halves of black and white, to kill what he sees as evil people.

Following Ditko’s retirement from comics, there have been heaps and piles of remorseless antiheroes brandishing violent justice from panel to panel. But what makes Mr. A. fascinating, and bizarre, is that his creator doesn’t see him as an antihero. Far from it! To Steve Ditko, this guy is the absolute shining icon of goodness! Mr. A. is without a doubt the unique and perverse vision of an auteur.

This entry was posted in Uncategorized and tagged Ayn Rand, Mr A, Pat Barrett, Steve Ditko, The Question, Witzend. Bookmark the permalink.